The Birds of Markeaton Park

Situated on the north side of Derby adjacent to the A38, Markeaton Park is a 207 acre recreation site. It has many different types of habitat, making it highly attractive to many birds.

This is designed to give visitors to the park, information on the birds that can be seen in even a short visit, and where to find certain species.

Whilst the best time for seeing birds is early morning, there are many quiet areas for uninterrupted observation.

More wildlife will be seen away from the A38, and consequently the Mundy Play Centre car park is the better access and starting point.

Bird sighting information over the last 15 years, has been gratefully provided by the Derbyshire Ornithological Society, who will welcome reports of any rare bird sightings.

Magpies and Woodpigeons are two of the regular and resident birds and Canada Geese can be found all over the park, with an average 150 birds present at any one time. In July 2001, a massive 504 Canada Geese were counted.

The local “Bermuda Triangle” of Markeaton, Allestree and Kedleston lakes, see these birds moving around regularly, but none appear to get lost in the triangle…..unfortunately! Canada Geese are seldom aggressive, but they are VERY messy. Bread is of no benefit to any of the birds, but seed, which can be bought in the craft village, is a healthier option.

Most of the Mallards are cross-breeds, look for the ones that are excessively white or brown.

Down the steps towards the play area, the stream often has Coots, Moorhens and Mute Swans. Trees along the stream are good for Siskins, Redpolls and Blackcaps.

In Spring, check the Boating lake, as Goosanders, especially juveniles, have been seen here.

Follow the path to the right, and cross Markeaton Brook into... 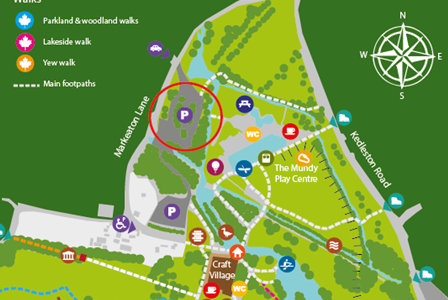 The waterfall and the sluice gate in particular are good places for Grey Wagtails.

Two tracks go through the wood, a good location for Tree Creepers, Long Tailed Tits, Wrens, Jackdaws. Great Spotted Woodpeckers are regularly heard drumming, with juveniles having been filmed for TV.  The right hand track is close to the water and known to be used by Kingfishers heading upstream.

Tufted Ducks come this far up the lake, and the occasional Mandarin Duck may be spotted, fighting to get to the food first. Some unusual birds, probably escapees seem to favour the pond, such as Chinese Swan Geese, Muscovey Ducks, and Indian Runners.

The 4 corner mullions of the bridge serve as a good place to leave seed for the birds, and Nuthatches can be seen very close when food is their priority.

Nuthatch is the only UK bird that can walk DOWN a tree, and with patience, 2 or 3 can be seen, usually flying straight to the branches above to hide the food in tree cracks and behind the bark.

4. The Portico and Yew Walk

Going clockwise round the duck pond, check the waterfall and stream to the right of the (defunct) waterwheel. Kingfishers favour this quiet area - 2 together were seen in 2012.

Continuing past the Friends of Markeaton Park gardens, turn left through the archway into what used to be the Rose Garden. Leaving and bearing right, the path leads to the Portico.

A short diversion through the Portico and up and down the Yew Walk, may encounter woodland birds, Woodpeckers, Jackdaws, possible Hawfinch. Hawfinches feed on Yew trees. The field adjacent to Yew Walk is a favoured location in the winter for Redwings, and Fieldfare, and the horse trough attracts a range of birds requiring water, including Pheasants.

Retrace your steps to the Portico, turn right, and follow the anticlockwise path back towards the main building...

As the path veers left, on the right can be seen a number of grave markings and obelisks which is the Pet Cemetery, and on the left is the bird feeding station. Members of the public regularly leave bird food on the bird table, and in bags on the branches, such as seed and fat balls.

Resting awhile on the conveniently placed seat, the feeding station can attract 3 Tit species (Blue, Great and Coal), as well as Chaffinches, Robins, Nuthatches and is a good spot for the pretty little Stock Doves.

At the same time, keeping an eye skywards, there is every likelihood of seeing Buzzards from Kedleston Hall, together with the Red Kites that have bred at there for the first time in 2018 and maybe the Peregrines Falcons from Derby Cathedral.

In the summer, Swallows, Swifts and  House Martins can be seen from this quiet spot. Swallows have bred in the rafters above the courtyard entrance.

Scanning the golf course can produce Jays, Common and Black Headed Gulls, and the occasional Wheatear and Green Woodpecker; the cricket pitch (when mown) is a good location for good numbers of Pied Wagtails.

Follow the path in an anticlockwise direction past the Craft village courtyard to...

From the duck pond bridge, the rest of the walk is anticlockwise round the main pond.

There is no public access to the islands, but a large number of species nest and breed there, such as Coots, Moorhens, Swans and Geese.

Goosanders also breed on the big island. Goosanders do not fledge until April/May and form large creches. It can be difficult to identify whether the newly borne are male or female, as newly borne juveniles look more like females. In 2006, a creche of 17 birds was recorded.

Juvenile Goosanders are very timid and easily frightened, and should be viewed with a minimum of disturbance. The juveniles are initially not able to swim underwater, and are dependant on the adults to provide them with food/fish.

Goosanders spend a lot of time fishing, and can go out of sight for up to a minute.

Cormorants are often seen feeding, Little Egrets may be amongst the bushes, or, with Grey Herons high in the tree canopy. Great Crested Grebes also breed, and whilst the occasional Little Grebe may be seen under the waters edge growth, they seldom stay all year.

Early birders may encounter Green Woodpeckers feeding on ants on the football pitches, and both Song Thrushes and Mistle Thrushes are tempted down to the grass when it is quiet.

On nearing the A38, turn left and follow the old rail track anticlockwise, over the lake and continue along the track veering away from the lake.

Ring Necked Parakeets have been seen in this area.

Where the lake goes under the A38, and the nearby trees, are well worth checking for Grey Wagtails, and Kingfishers who favour the sandy banks.

The old rail track heads off into the woods, to a path and a bridge over Markeaton Brook. Much of this area is left to grow wild and is excellent for Summer Warblers. Blackcaps, Chiffchaffs, Willow Warblers, Whitethroats all frequent in this area, and the bird song in March and April is magical.

...and anywhere may be found Goldfinches, Starlings, House Sparrows and Carrion Crow.